A long while back I bought a pair of JBL LSR 4328P studio monitors. Following are some notes I had jotted down at the time regarding their shipping and setup: 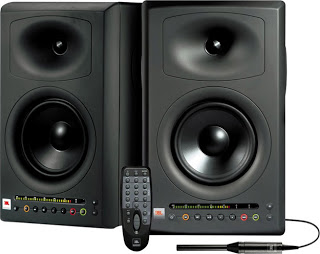 The monitors were packaged for shipping really well (heavy little suckers though). The set I purchased included the monitors, remote control, microphone, and all the cables needed. The setup was pretty straightforward. To get them setup put the monitors where you want them in the room. Next network the two (or however many you have) monitors together with a CAT5 cable. If you have more than two monitors you'll end up daisy chaining them together. The monitors that are at either end of the chain you have to terminate with CAT5 terminators (they come with the monitors don't worry). Set the switches on the backs of the monitors to correspond with the room location of the monitor. The last thing you need to do is plug in the power.

Performing the room mode correction is also straightforward. Just plug the RMC mic into the monitor and position it in the room at your listening location. To do the actual adjustment press and hold the RMC button. The monitors will do a frequency sweep (it's a little loud but not too ridiculously loud). Once that's done you should be good to go.

These monitors provide an extremely accurate image of what you have recorded with a very flat frequency response. I would recommend listening to some of your favorite CDs on these (or really any high-end) studio monitors and you'll be shocked at everything you hear. I would definitely recommend these to anyone considering them. The only drawback is the price tag.
Posted by Unknown at 11:26 AM